Did you guys catch TLC's extreme couponing last night ? I think it originally aired Dec 29th, so this was a repeat.  I accidentally landed on it right when it started and had to watch.  While I like to save money, I have to wonder about the practicality of these couponers.  So much time and effort is put into their couponing and I'm not sure if it's worth it.  Having some stockpile and getting the best deal is worth a little time, but buying so much that you have to insure it separately with your  homeowner's policy is too much for me.  And is it possible that they are actually hoarders?  Could they eventually end up on TLC's Hoarders- Buried Alive show?

I do have to say that it is a lot easier now to coupon than it was when I was first starting out in the late 80's.  When I went to college (88 to 92), the internet was non existent to just starting.  While collecting coupons from the Sunday paper helped, the selection of coupons in the inserts were limiting.  I did try to save coupons and search the sales to make the best savings, but again this was before all the stores came up with reward cards and such.  I think those started around the mid to late 90's for my area.  Coupon clearing houses were the best way to go.  I remember stumbling across the idea in one of my Tightwad Gazette newsletters when I was still in college.  Anyone remember that newsletter?  I heard about it when the owner Amy Dacyczyn was on the Phil Donahue Show (anyone remember that show?).  I sent away for my own coupon booklet and couldn't wait to start selecting coupons.  Again, choices were limited, but it really helped me find great coupons especially for cat and dog food.  Each booklet had several pages that listed items you could check off to see if any coupons were available.  You sent your selections back along with the processing and handling fee and a sase (for those of you youngies self addressed stamped envelope).  Then you waited.


And waited.  And when your envelope came back, you hoped that all your choices were available.  Some times they were and sometimes they weren't.  Rebating was also a big deal back then.  You could subscribe to rebating programs that would send you lists of all the rebates available.  That's when you could really save money.  I remember getting a book from the library Ask the Coupon Queen by Mary Anne Hayes and being amazed at how much she saved from coupons and rebating.  Look at how old this is- 1979! 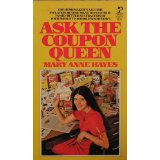 There was another book really popular that I read, but can't remember title or author.  This author also used coupons and rebating to bring her grocery bills down next to nothing.  Again a lot of time and energy went into this, probably more so than today since the internet and websites make it easier to obtain coupons and search sales.
While I do not coupon as much as I did years ago, I do still like to save money.  I probably won't have a stockpile in my garage taking over the space (we have a ton of outdoor toys that do that quite well!), I do still enjoy getting a really good deal and knowing that I did save some money.
Too bad I didn't start a website about couponing when the internet first started.  Heck, we didn't really think it was going to be such a big thing.  So missed a great opportunity!!﻿
Posted by Rochelle at 7:13 AM