Hi- remember me? My name is Rochelle and I sometimes get time to write on my blog. Unfortunately, the last week or so -FORGET IT! I don't know where the time goes or what I am doing. I wonder if I should keep a time log. But then I don't want to depress myself! The kids have started baseball and softball and I've been busy with games and opening day. No. This year I didn't punch my kids! This year was just as chaotic, but we muddled through the day.

Last Sunday, my husband put in the new bamboo floor in our bedroom. While it looks beautiful, I'm not crazy about the durability. I was aware that bamboo floors damaged easily, but a couple of the planks cracked down the middle after installation. You can't tell unless you are on the floor with your eyeball resting on them- only I crawl around looking for flaws. The bed also covers them so no worries that any one will ever know. Please don't tell! It does look rather nice though I am hesitant to use it again. The thought of them already being damaged after just a few hours is sickening. If they weren't located in the middle of the floor, Jeff would have taken them out. At this point it's not worth the hassle especially since they are hidden.

Well, I just wanted to reintroduce myself. One day I am going to get my life in order. It is possible right?
Posted by Rochelle at 7:00 AM 0 comments

We really are not poor

Why is it the one day your entire family decides to dress in their worst clothes is the one day you run into the one person you thought you would never see? This happened last night. Sunday night Paige's coach called to say she had a game Monday night (we still don't have uniforms nor schedules). Before I left for work I gathered all the gear needed and had them ready. I told my husband that Paige's softball pants were hanging in Jeff's closet if it's too cold for her softball shorts. I even called him 2 hours before the game to review the list I had left them. You see I was going to meet them at the field since I work till 5pm.

When they show up at the game- late of course because Jeff had to squeeze running on the treadmill, they looked like a band of ragamuffins. My son had on these dollar store slip-ons, Paige had her old uniform on but wore a pair of sweatpants that were 2 inches too short and my husband wasn't that bad looking as he had on jeans and an old zip up jacket.

It wasn't until around the 2nd inning that I realized the coach of the other team was an old boyfriend's best friend. I haven't seen him in 20 yrs. I hoped he wouldn't see me as I was on the other side and this was the only game against them. Except the fact that my husband was keeping stats and around the 4th he asked me to keep them while he played catch with my son.

As soon as I walked over to the dugout he spotted me and waved. No biggie. But then when the game was over and I was trying to get out of the dugout, he came over and asked which girl was mine. Yep that would be the one in the high water pants that are way too small! Then my son came over to be nosy in his lovely shoes. Maybe since he's a guy he wouldn't see the same things as a woman would. Oh well, I love my family and shouldn't care what anyone thinks of us. I know we normally don't look like this-besides, I will just blame it on my husband!!
Posted by Rochelle at 7:05 AM 0 comments

My family really worked hard to give me an extra special Mother's Day this year. Paige made a coupon booklet filled with lots of great coupons for chores, back rubs,etc. Jeffrey Michael made a flower at school and each petal had a task on it. I just pick a petal and he is suppose to do it. Jeff Allen made me breakfast in bed (my usual Mother's Day morning) and bought me tulips. Last night we went to Lowe's and purchased a lot of things for around the house. The best purchase of all- a new kitchen faucet which he installed this afternoon- with no problem!! No more fountain of water soaking me as I fill up the sink with dish water! It was way above what he wanted to spend - but not the $750 I saw! Our kitchen sink looks a million times better. Now he said the counter tops look terrible. Oh well, I'm still glowing from my faucet!
I downloaded Jeff's Communion pictures- 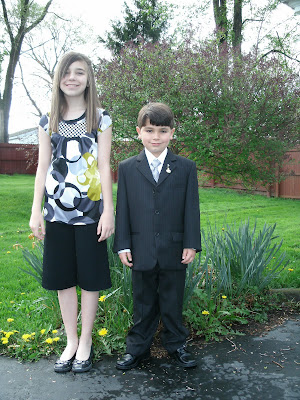 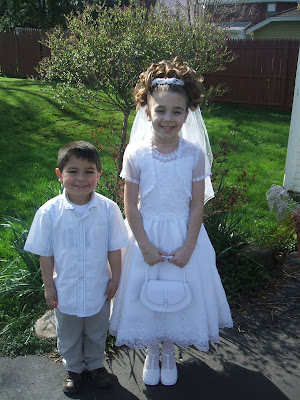 They grow up too fast!

Ok, what just happened? It's already May 6th. Yikes!

Jeff had a great time in Chicago and we missed him terribly. Well, we missed the physical him, but it was so nice not having to clean up after him! Let's just say he got extra lucky when he came home Sunday night. Hehe.

Monday night when I got home from work, Paige informed me she had her first fast pitch game. We don't have uniforms, a team name, and there have only been 2 practices. That should tell you how well we did. It wasn't as bad as we thought- they lost 13-4. Paige played 2nd base and did a great job. I could tell she was a little unsure as she was a pitcher all last year. She did get a triple on her second at bat. Her face was priceless- in fact she even gave me a thumbs up!! If you remember from last year we were never allowed to acknowledge her during games.

Tuesday night Jeffrey M had a science fair. It was the first time the school sponsored this and in true New Castle form it was really poorly done. Hopefully next year they will plan better. Jeffrey did the tornado experiment with 2 soda bottles. We tried to add an army guy for effects but he kept clogging the hole. Red and green glitter replaced him and everyone loved it.

Last night was practice for both kids. I did manage to get a load of laundry done late around 11pm. If you couldn't tell, I have been so busy after work that nothing has been done. We have been cooking dinner despite not planning out our week. Sunday I took the kids to the grocery store and we stocked up on a lot of staples. I spent $93.40 at Aldis which is a lot. No meat was purchased for the week as I ran out of money and Jeff hasn't had time to get to the store.
Monday they had grilled cheese sandwiches and soup, Tuesday was pizza and macaroni and cheese, and last night was french toast. Tonight will be pasta. No clue what we're eating the rest of the week although I am hoping to go out on Sunday for Mother's Day. I'm not sure I will be in the mood for any company being my first Mother's Day since my mom's death. Will have to definitely work on being in a good mood for the kids!

Tonight (I hope) their is no activity planned. I really need to get more laundry done! Poor Paige only has a couple pairs of shorts and unless I want to wash the same clothes I need to get shopping.
Posted by Rochelle at 10:57 AM 0 comments